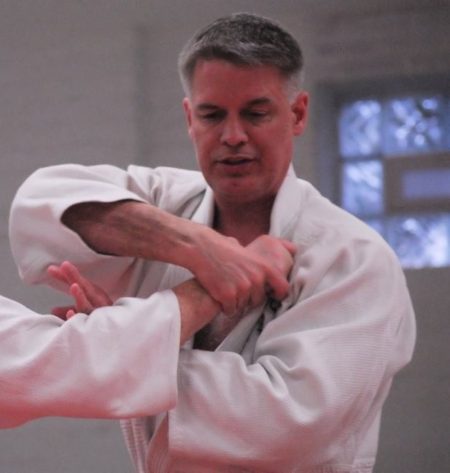 Shihan Michael Hawley began his Aikido training in February 1991 at Kin Tora, first seeing Aikido in the Orient during his many travels in the Navy, and it soon became a passion of his. He had experience in boxing and wrestling and became immediately aware that aikido complemented these disciplines. Soon, he became chief instructor at Kin Tora for Wadokai Aikido, founded by Sensei Roy Suenaka. Suenaka was a direct student of the founder of aikido, affectionately referred to as O’Sensei. Suenaka Sensei received the Certificate of Mastery from O’Sensei in the 1960s, an honor given to a select few. While in the Air Force, Suenaka was tasked to trained special forces. Our Aikido program continues to this day under the guidance and training of two 6th degree, two 5th degree, and numerous subordinate black belts. While at Kin Tora, Shihan Hawley also received his shodan in judo. Our aikido classes are designed for all levels of experience, from novices to seasoned black belts. New students receive special attention. One requirement for joining us on the mats is to thoroughly enjoy yourself. Few leave the class without a smile and satisfaction that what they’ve learned is extremely effective self defense. He retired as a Commander and Naval Aviator in the US Navy in 2009 and has been a science teacher for over twenty years. He has also authored six books, three fiction and three nonfiction, and lectures, and has even lectured in Liverpool, England.